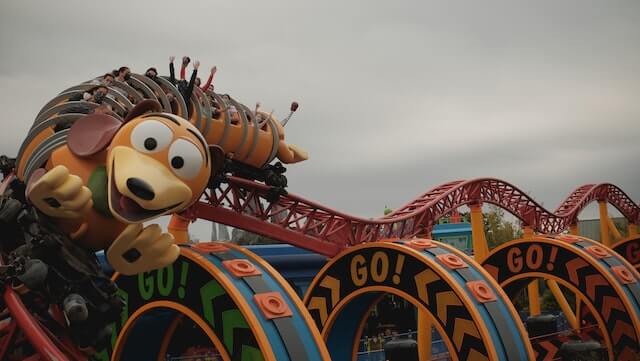 Disney World is a magical place that has something for everyone. From thrilling roller coasters to enchanting parades, there are countless attractions to keep visitors of all ages entertained. In this blog post, we will take a look at some of Disney World’s most famous attractions!

The Magic Kingdom is the most iconic of all Disney World’s parks, and it’s home to some of the most famous attractions in the world.

The park is divided into six different lands, each with its own unique theme and attractions.

Space Mountain is a classic Disney attraction that has been entertaining guests since it first opened in 1975. It is also one of the oldest roller coasters in Disney World. It has undergone several updates to keep it fresh, fun, and exciting for all the new generations of Disney lovers. It’s a must-visit attraction that should be on everyone’s Disney World bucket list.

This indoor roller coaster takes riders on a thrilling journey through outer space. The ride begins with a slow climb to the top of the mountain, where riders are plunged into darkness and surrounded by stars.

The ride then takes off at high speeds, featuring twists, turns, and drops that will leave your heart racing.

The roller coaster also features special effects like flashing lights, sound effects and even smells that immerse the riders into the experience. It is a must-ride attraction for thrill-seekers, and a favorite among both children and adults.

Another popular ride in the Magic Kingdom is Splash Mountain. This log flume ride takes riders on a journey through the world of the Disney classic, “Song of the South.” Along the way, riders will encounter animatronic characters and a thrilling five-story drop at the end of the ride.

Read here: Tips for a Budget-Friendly Trip to Disney World

The Haunted Mansion is a classic dark ride that takes riders through a spooky mansion filled with ghosts, ghouls, and other eerie sights. The ride is full of special effects and animatronics that will leave you on the edge of your seat.

Epcot is a unique park that combines the thrill of a theme park with the educational experience of a world’s fair. The park is divided into two main sections: Future World and World Showcase.

One of the most popular attractions in Epcot is Soarin’. This flight simulation ride takes riders on a thrilling journey over some of the world’s most beautiful landscapes. The ride uses a combination of projection screens and wind effects to give riders the sensation of flying.

Another popular attraction in Epcot is Test Track. This high-speed ride takes riders through a simulated test facility where they can experience the thrill of speeding through the track at high speeds. The ride also allows riders to design their own virtual concept car and test it on the track.

IllumiNations: Reflections of Earth is a nightly show that takes place in the World Showcase Lagoon. The show features fireworks, laser lights, and music that tell the story of the history of the Earth.

Disney’s Hollywood Studios is a park that is dedicated to the magic of the movies. The park features some of the most popular attractions in Disney World, including thrilling rides, shows, and parades.

The Twilight Zone Tower of Terror

One of the most popular attractions in Disney’s Hollywood Studios is The Twilight Zone Tower of Terror. This thrill ride takes riders through a haunted hotel where they encounter ghosts and other spooky sights. The ride ends with a thrilling drop that will leave your heart racing.

Another popular attraction in Disney’s Hollywood Studios is Rock ‘n’ Roller Coaster Starring Aerosmith. This indoor roller coaster takes riders on a high-speed journey through the world of rock ‘n’ roll. The ride features Aerosmith music and special effects that will make you feel like you’re at a concert.

Fantasmic! is a spectacular nighttime show that takes place in the Hollywood Hills Amphitheater in Disney’s Hollywood Studios.

The show features a combination of live action, special effects, pyrotechnics and state-of-the-art technology to tell the story of Mickey Mouse’s journey through his imagination.

It begins with a colorful parade of Disney characters, and then Mickey takes center stage as the sorcerer’s apprentice. From there, the show takes on an epic journey through some of Disney’s most beloved movies, such as The Lion King, Aladdin, and Beauty and the Beast.

The show also features appearances from some of Disney’s most iconic villains, including Maleficent, Jafar, and Ursula, as they try to defeat Mickey and take over his imagination.

The special effects and pyrotechnics in the show are truly breathtaking, as they create a mesmerizing and magical atmosphere. The show’s climax is a dramatic battle between good and evil, with a beautiful and powerful display of fireworks, water fountains, and laser lights.

Fantasmic! is a must-see attraction for anyone visiting Disney’s Hollywood Studios.

It’s a family-friendly show that appeals to audiences of all ages, and it’s a perfect way to end a day at the park. A great way to avoid crowds is by watching the first show and leaving before the second one.

Guests can also enjoy a special dining package that includes a meal at one of Disney’s Hollywood Studios’ restaurants and priority seating for the show.

With its dynamic and captivating storytelling, fantastic special effects, and iconic Disney characters, Fantasmic! is a truly magical experience that will be remembered forever.