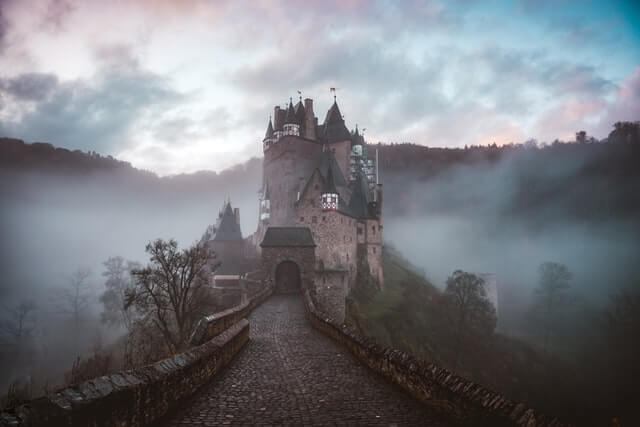 Get on the air this Halloween and visit some of the most popular haunted places in San Francisco.

If you can’t go this year, don’t miss it and add it now to your next year bucket list!

Learn more about the most popular sites during Halloween in San Francisco. They are scary and funny and you are going to love them!

Stow Lake is a man-made lake with an island in the middle.

One of the most famous ghost sightings at Golden Gate Park is the “white lady” in Stow Lake.

The story goes that more than 100 years ago a woman lost her baby in a lake and went in after him but never returned. During the night there were reports of her and her baby.

Neptune Society Columbarium has been used as a burial site since 1898.

There are claims of a small hand brushing up against visitors, as well as seeing the ghosts of a young girl whose ashes are buried within the building.

If you love a terror story, this one could be for you.

This place is where students with a passion and interest in art have attended to accelerate their careers in modern art.

However, it’s believed the Art Institute had been built above a cemetery.

Sutro Baths was one of the largest swimming pools in the world and one of the major tourist destinations in San Francisco.

However, after a sad fire that happened in 1966, everything started seeing to be delayed by its ghostly visitors.

If you want to extract the best of your Halloween, this is a must-go place.

Let’s go back to 1933 when a theatre ticket dealer was robbed and killed at The Curran Theatre.

After this case, guests reported seeing him mourning at the reception area. It’s crazy, isn’t it?

However, what do you think to go there and confirm this story? Oh, and don’t forget to tell us about your experience!

San Francisco’s first city hall was burned down in the 1906 earthquake and the present building was built in 1915.

Others include the assassinations of Mayor George Moscone and Supervisor Harvey Milk.

Since then, people have reported hearing strange sounds in the Hall when no one is around.

However, how is it possible that a national cemetery, a historic building and an old military base could not be slaughtered?

Difficult answer for a difficult question. But, anyway, people have reported seeing ghost people and military men performing their normal duties on the ground.

The Letterman Digital Arts Center is said to be the center of many paranormal activities on site.

Built in 1887 for Richard Craig Chambers, the Chambers Mansion is a Victorian style house whose owner, who once died, passed the house on to his nieces and nephews.

According to an urban legend reported by many bloggers, Chambers lived there with his two nieces who hated each other.

Once he died, the nephews did not get along, and soon they found one of them cut in the house.

Psychologists say that a nephew’s ghost is still roaming around the house, especially flashing lights from a high window.

Whittier Mansion is a building located at 2090 Jackson Street in San Francisco, California.

Rumor has it that the Whittier Mansion housed German spies during World War II.

The ghosts of these German spies are believed to be roaming the mansion till today, and some of the visitors have also said they had seen a bald man wandering the corridors and an old woman’s ghost sitting on a chair.

Senator David C. Broderick had a powerful hold on the city of San Francisco, and this case starts with him.

He was an outspoken abolitionist, while Ted, his friend, supported of slavery and advocated for its extension into California.

In conclusion, Terry lost re-election and started blaming David C. Broderick for it.

They started a duel on the edge of Lake Merced, which Terry won by killing Broderick.

Alcatraz has been known to give tourists and locals the chills, and is also one of the most haunted places in America!

Visitors have heard voices, clanging doors, and footsteps behind them as well as felt unnaturally cold in the Dining Hall.

Find out more about Alcatraz!

Did you like to know a little more about these places?

There are plenty of haunted places to be explored in the world, and if you love these experiences, comment below, we would love to hear from you!