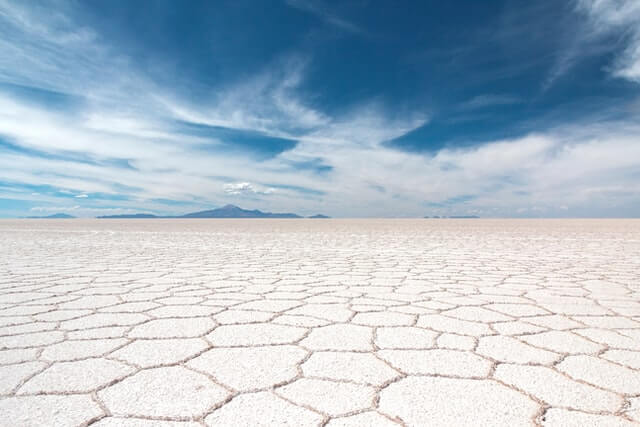 Salar de Uyuni, the largest salt flat in the world, is magical. Located in Bolivia, it is one of the places that everyone needs to go to at least once in their life. Learn all about the Salar de Uyuni in this article.

The Salar de Uyuni is the largest salt flat in the world, located in Bolivia near the border with Chile and on the edge of the Andes. With more than 10,000 square kilometers and a unique landscape, the desert impresses and yields wonderful photographs.

Because it is the only natural bright spot that can be seen from space. And it served as a reference for the Apollo 11 astronauts when observing the Earth. And to this day it is used to calibrate sensors on Earth observation satellites.

Salar de Uyuni contains more than half of the world’s lithium reserves. It is also rich in potassium, boron, and magnesium in its many layers of salt.

The place is not one of the most accessible for tourism, but the unusual landscape guarantees a good destination to enjoy and makes the trip a true adventure.

The salt desert is more than 3,650 meters above sea level in a long desert region. The Salar de Uyuni may contain more than 10 billion tons of salt, which extends over an area of more than 10,000 km².

Uyuni is the main gateway city and the region is widely visited from San Pedro de Atacama in the Atacama Desert.

To get to the desert, you can start in the Atacama, in northern Chile. Because of the relative proximity of the two destinations, many people take the trip to visit both. Or, you can start in La Paz and go to other incredible attractions such as Lake Titicaca on the border with Peru.

What is the best time to go to Salar de Uyuni?

During the rainy season, which lasts from December through March, the weather is mild, despite the region’s characteristic cold and the possibility of snow. It is during this time, that the Salar de Uyuni can form the magical mirror, which guarantees surreal photographs.

The dry season, on the other hand, leaves the salt landscape all cracked and with geometric shapes on the ground. Usually in very beautiful hexagons. It is easier to move around and there is no sign of rain. Most tourists frequent the region at this time of year. Temperatures can be very cold, especially between May and August. The so-called dry season usually lasts from April to mid-November.

Things to do in Salar de Uyuni

On the Salar de Uyuni expedition in Bolivia, you can also visit the trans cemetery, which looks more like a film set from Mad Max, and the Eduardo Avaroa National Reserve.

You can also observe the flamingos, which usually visit the salt desert during the summer and flock to the lagoons where they can feed abundantly.

Throughout the entire crossing to the Salar de Uyuni through the Eduardo Avaroa National Wildlife Reserve in Bolivia, you will come across a plethora of friendly llamas that live in the area, of all colors and sizes.

You will have the opportunity to enjoy a nice bath in the natural thermal pools, called Termas de Polques. At the foot of a hill, the Thermal Waters of Polques are watering originating at the bottom of the Polques volcano, emerging from the rocky subsoil and contrasting with the external temperature of the region, which is mostly cold.

Insider Tip: The dominant languages are Spanish, Quechua, and Aymara. And to enter you need an international certificate of vaccination against yellow fever.

Did you know this paradise on earth? How was your experience at the Salar de Uyuni? Tell us about it in the comments.