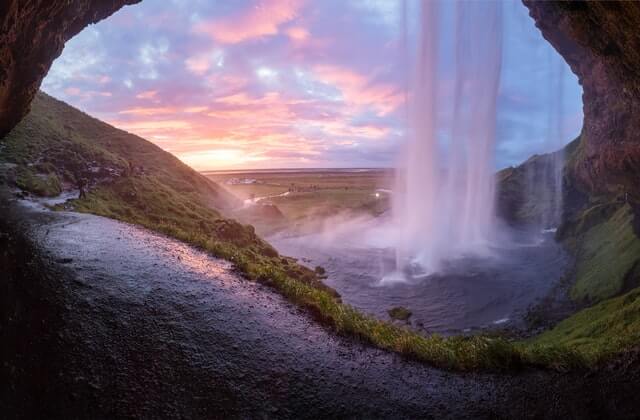 Yes, Iceland is a paradise. Covered in snow and rich in natural beauty, the country offers a menu full of options for those who love ecotourism and adventure. There are plenty of waterfalls there for you to check out on your next adventure. Here, in this article, are the top five waterfalls in Iceland.

Did you know that Iceland’s waters are the cleanest in the world? Then it is certainly the best place for you to enjoy waterfalls. There are endless waterfalls in Iceland, either in inhospitable places, with crystal clear water, surrounded by unbelievable scenery. Perfect places where you can connect with Iceland’s wilderness.

Most of the waterfalls are easily accessible and can be reached without too much hassle, and they offer free parking and free entrance. In Iceland it is like that, almost all attractions are free.

The waterfalls are the result of the impact of numerous glaciers, so they are fed by pure waters that sculpt the rocks. Combined with volcanic activity, these falls create fascinating shapes, such as hexagonal basalt columns that decorate many of them.

Check out the best 5 Iceland waterfalls

Iceland is known worldwide as the “Land of Ice and Fire” because the two forces coexist equally in the country. Even though ice covers only 10% of this island full of contrasts, the largest glaciers in Europe are located there. So it is no wonder that there are incredible waterfalls to visit. Check out the five best waterfalls in Iceland right now.

Located on the Snæfellsnes Peninsula, Kirkjufellsfoss is a small waterfall that drops in three streams from a ridge on the Helgrindur Mountain. Less than 20 feet high, its top is the best spot to capture the aurora borealis in winter.

In summer, the midnight sun is also a sight to behold. Photographers love it for the possibility of capturing the contrast between the serenity of the water and the mountain in the background.

Known as Lava Falls, the Hraunfossar waterfall is located in Borgarfjörður, 64 kilometers from Reykjavik. The falls are formed by small streams that flow from the springs, creating rapids that descend into the Hvítá River. The impression is that the water seems to emerge from the Hallmundarhraun lava field, hence the nickname. Peaceful and serene, Hraunfossar is considered one of the most spectacular waterfalls in the country.

The waterfall has even been protected for more than 30 years. Moreover, unlike other similar waterfalls, it has tourist facilities, such as a parking lot and a cafe that opens in the summer.

Hrafnabjargafoss is located on the mighty Skjálfandafljót glacier river, in the north of Iceland. The waterfall is the first of three successive falls along the same river that attract many visitors. The other two are Aldeyjarfoss and Goðafoss. The impression you get of the falls is that of an open veil in the middle of the vastness of ice.

Read here When and Where to see the Northern Lights in Iceland.

In the south of Iceland, near the volcano Hekla, is Háifoss, a waterfall with an impressive 120 meters. When it was discovered in the early 19th century, it was thought to be the highest in Europe. Hence the name, which translates as High Falls.

Gullfoss is located on the mighty Hvíta glacial river in southern Iceland. Also called The Golden Waterfall, it is part of the famous Golden Circle, the country’s most popular tourist trail that also includes the Geysir Geothermal Area and Þingvellir National Park.

The drop drops 32 meters down the gorge between two columns, flowing from Lake Hvítárvatn and the Langjökull glacier.  You can get close enough to feel the spray of water on your face.

What did you think of our choices? Have you been to any of these waterfalls in Iceland? Tell us in the comments how was your experience.