Home » Tips » Iceland’s northern lights: when and where to see the Aurora 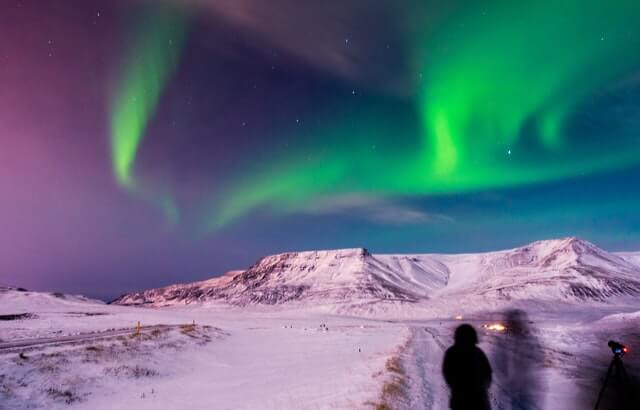 Iceland is a country located in the North Atlantic Ocean, between Europe and Greenland. This Nordic island is increasingly arousing curiosity among more adventurous travelers.

Little known until 2010, when its Eyjafjallajökull volcano erupted and caused chaos in European airspace, Iceland has in recent years become a darling among tourists looking for more exotic destinations.

What are the northern lights?

The aurora borealis, also known as the northern lights, is a natural phenomenon produced when particles coming from the Sun, known as the “solar wind”, collide with our planet’s magnetosphere.

In this way, the contact between the solar wind and the oxygen, nitrogen, and hydrogen in this protective layer at a height of more than 500 kilometers creates the famous aurora borealis. These are attracted by the Earth’s magnetism, both in the Arctic Circle and in the Antarctic, in the southern hemisphere, in which case they are called the aurora australis.

Iceland is known for being a prime location for observing the northern lights. This is because the island is isolated in the middle of the North Atlantic and relatively untouched by urban light pollution. It is easy to understand why Northern Lights enthusiasts like to go there to contemplate this event.

When is the best time to see Iceland’s northern lights?

The best time to see the aurora borealis is officially from September to April, during winter. Within these various options, it is possible to find days that are very favorable and others that are not, depending on the weather and the hours of sun exposure.

In this way, the short days of December, January, and February, which can be up to twenty hours of the night, are ideal for seeing the aurora borealis in Iceland.

Read here: What is the best time to visit Iceland?

Where are the best places to see Iceland’s northern lights?

The most important thing about viewing the aurora borealis is that there is no light pollution. Therefore, any spot in the wilderness of Iceland can be a good place to observe the northern lights.

Still, the closer you are to the Arctic Circle, the more chances you have to witness this phenomenon. However, the factors pointed out above do not prevent one from enjoying the aurora borealis in Reykjavík. What you must take into account is the distance from the urban center to avoid light pollution.

Below we have listed some of the most famous places to watch Iceland’s northern lights. Keep reading.

The beach is in a small village on the southern coast of Iceland, south of the Mýrdalsjökull glacier. Made entirely of black sand, the beach is a popular spot and one of the best places to watch the northern lights in Iceland.

The glacial lagoon, located in southeast Iceland, is one of the best places to observe the northern lights in Iceland. In the lagoon, the placid blue waters are filled with icebergs from the Breiðamerkurjökull glacier floating by.

If you go a few kilometers away from the city, it is possible to admire the lights of the northern. Go to Álftanes to see the aurora borealis dancing above the Icelandic capital.

In the south of the country, we find the spectacular Skógafoss waterfall. Located on the Skógá river, and over 70 meters high.

The harbor at Borgarnes

Do you also dream of seeing Iceland’s northern lights? Tell us about your experience. We are sure it was transformative.